What is Network Penetration Testing and How Can it Help My Business?

One of the most common pen tests is network penetration testing. Read on to find out what's involved and what to consider before buying one...

Penetration tests have become a popular way for businesses to assess their risks and develop a plan to improve security measures.

But if you’re looking to get your first penetration test, you’re likely to find yourself confronted by lots of different types of penetration testing and it can be difficult to know what service is right for your business.

One of the most commonly performed penetration tests is a Network penetration test. In this article, we’ll outline exactly what this is, why it helps, and what you need to consider before buying a pen test.

What is Network Penetration Testing?

Network penetration tests involve an ethical hacker, or pen tester, examing a network and identifying vulnerabilities and gaps in security that would allow a real bad actor to breach it.

Unlike a vulnerability scan, a penetration test is exploitative in nature, to mimic the actions of someone really looking to do damage, so a company can better address their weak areas and improve its security posture.

Pen testers will use a variety of common malicious techniques used by hackers to breach systems, such as malware, phishing and advanced persistent threats and record any vulnerabilities these uncover.

Network penetration testing can be performed via two main approaches: internal and external. In an external pen test, the tester will try to breach the network perimeter to identify any security weaknesses within internet-facing assets.

An internally focused test, on the other hand, examines the internal company network and could look at the potential risk of common threats like insider attacks, among others. These tests mimic a scenario where the hacker has already gained access to your internal network.

The Benefits of a Network Penetration Test

Penetration tests have numerous benefits for an organisation. Most importantly they allow you to identify if there’s anything going wrong with your security and what needs to happen to fix it.

Pen testers will be able to tell you how critical a particular vulnerability is so you can prioritise your remediation and focus your security measures where you most need them.

Unlike other security audits, penetration tests involve the actual exploitation of vulnerabilities, giving you a clear picture of what a hacker would really do and the damage that would be caused. This gives you a stronger appreciation for the importance of preventative security measures and the capabilities of threat actors.

Penetration tests can also aid in compliance with industry standards and regulations. For example, network pen tests will often shed light on vulnerabilities that would prevent you from aligning to recognised standards like Cyber Essentials and ISO 27001.

Network penetration tests are generally carried out in 5 main stages:

At this stage, your pen test provider will establish what exactly you will be testing and which methodologies will be used. The overall aims and goals of the testing will be laid out and it will also likely be decided whether white, grey or black box testing will be performed at this stage.

During this stage, pen testers will need to gather intelligence and start to implement tools like port scanners to start to identify ways of getting into the network. Pen testers will then look for potential vulnerabilities to exploit on the basis of the information collected.

This is where the bulk of the testing will happen. Based on the vulnerabilities uncovered during the Discovery phase, the testers will attempt to exploit that vulnerability using various methods to see if any may successfully grant them access to the network. Techniques may include social engineering, brute force attacks, web application attacks and SQL injections. The pen testers want to see the extent of the damage they could potentially cause to know just want an impact a real attack would have on your business.

Throughout this stage, the testers will keep a record of the results of these exploits so they can show you which vulnerabilities pose the greatest risk to your business.

The final stage of the process involves analysing the results of the pen test to see which vulnerabilities are most critical and which were successfully exploited to allow access to your network.

A good report will provide both a technical and a business summary that includes details about the risks uncovered and the impact if an attack was successful.

You should then be given remedial recommendations so you know exactly what must be done to address the vulnerabilities identified during the pen test. This might involve improving policies and training, applying certain security patches or upgrading old devices that are no longer supported.

Is a Network Penetration Test for Me?

A network penetration test is a useful tool for identifying your vulnerabilities and improving your overall business security, but the more targeted they can be the more valuable they tend to be.

Many businesses opt for a less exploitative all-around vulnerability assessment before a focused penetration test to locate areas of weakness in their security. Penetration tests will often set you back a few thousand pounds so you want to make sure you’re investing in one at the right time.

Some companies may be required to undergo a penetration test for certain tenders, in which case you should definitely explore penetration test providers, but if you are already concerned you may have vulnerabilities in your infrastructure, a vulnerability scan is a great place to start to scope these out first! You can then build on this with a deeper, more focused network pen test later on. 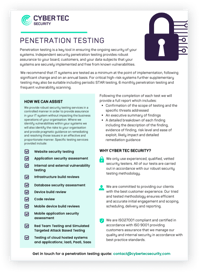 Related articles
Black Box Penetration Testing: What Is It and Is It Right for My Business?

Black box penetration testing is the name given to the style of testing where the pen tester is given no access to your systems and no inside knowledge...

How to Prevent Ransomware Attacks

Ransomware is one of the biggest cyber threats facing businesses today. Read on as we look at how ransomware affects companies and how to prevent attacks.

Don't Let Your Security Suffer Because of This Common Problem

With so many business priorities and only a number of staff to dedicate time to them, cyber security can often fall off the radar...